For my Eagle service project, I chose to restore the view tubes near Mt. Lowe in the Angeles National Forest. Since this is the Bicentennial year, in addition to benefitting present day hikers, I thought this would have historical significance. You may ask, “What are view tubes?” … They are tubes of pipe that point out cities and places of interest. Although, I have not been able to determine the exact time the view tubes were built. I believe it was during the early 1900’s when this area of the San Gabriel Mountains became a popular resort. In 1893, the Mount Lowe Railway opened, later taking visitors to Ye Alpine Tavern (also known in later years as Mount Lowe Tavern) at Crystal Springs. The campground we stayed in is on the site of the old hotel. For about 40 years, many people made the two hour railway trip from Los Angeles to Mount Lowe. In 1936, the Alpine Tavern was destroyed by fire and then in 1938 the final blow to the Mount Lowe Railway came when heavy rainstorms washed away many trestles and some of the roadbed. After this the Mount Lowe Railway was dismantled and many years later the Forest Service cleared away the remains of the Alpine Tavern. The view tubes were not removed but were left to rust and fall into disrepair.

On the 19th of October, (1975) Scoutmaster Dave Hood and I hiked to Inspiration Point on the trail coming from Eaton Saddle. When we got there, we looked at the view tubes and tried to figure out what was originally written on them. We were able to make the writing out on some of the tubes, but I had to do a fair amount of research on what they originally pointed to. The eleven tubes that remain today (back when this was originally written in 1975) locate Glendale, Santa Monica, Venice, Pasadena Museum of Art, Silver Lake, Los Angeles, Redondo Beach, Catalina Island, the Rose Bowl, San Pedro and Long Beach. When we went to the point the view wasn’t that good, the weather was nice but it was a fairly smoggy day. On a clear day, you can see the entire Los Angeles Basin as far away as Catalina Island. Two out of the five times we went, there was very little smog.

On November 1st, (1975) Boy Scout Andy Carpentier and I went to research an exhibit on Mount Lowe at the Los Angeles Museum of Science and Industry. The exhibit called “To Mount Lowe with Love” was put on as a Bicentennial Project by Southern California Edison and Orange Empire Trolley Museum. We found a couple of pictures of Inspiration Point and also a couple of articles on the history of the area.

On the 16th of November, Dave Hood, Carl and Mark Hood, my father and I went to meet Ranger Richard Warren at Sunset Ridge in Angeles National Forest. When Ranger Warren got there, we all got into his station wagon and proceeded on a dirt road for about four miles to Inspiration Point. At this time I reviewed the project with the ranger. He set down some rules and requirements that we had to follow for the safety of ourselves as well as the other people. One of the rules was we could not go there when the fire plan was higher than six. The fire plan determines the fire danger for that particular day. He gave us permission to use a portable generator, but it had to have a spark arrestor, the fire plan had to be five our less, and we had to have a fire extinguisher. The ranger issued us a permit and sent it to Scout Master. He also gave us a key for the locked gate at the beginning of the dirt road.

After I got permission to do the project, I proceeded with my preparations to restore the tubes. The preparation included taking compass sightings to make positively sure that the tubes were pointed in the right direction. Also, I had to make stencils o fit the tubes. These stencils were handmade and it took about an hour to make each one. I had to gather the equipment that was needed and organize the scouts who were going with me to work and earn their service hours.

On December 26th, Dave Landry, Carl Hood, Harold Levy and I went to work up there for the first time. Harold Levi and I were the first to arrive at about 8:30am. We started ripping out weeds and cleaning up trash, metal and rocks. At 11:00am, Dave Landry and Carl Hood came to join us. While some were weeding, others wire wheeled, repaired and adjusted the tubes. At12:30 we took a rest break and waited for about an hour for the dust to settle. At 1:30, we put on the first goat of gloss black paint. After all the tubes had their first coat of paint, all of us went to Mount Lowe Campground to spend the night. We cooked dinner and looked around the area. The next morning, December 27th (1975), we put the second coat of paint on and waited until the paint dried. Then we started to spray the names on the tubes in white. We got three tubes done, but due to the gusty winds we could not continue. I made a wind box out of a cardboard box, but it wasn’t enough, so I had to make plans to come back at a later date and do the rest of the names.

Because of the winds, I was forced to design and make a better and stronger wind box. This wind box was made out of wood and plastic. Finally, after about three weeks, I found the right day to return when the day was calm and I had transportation. It was on the 11th of January when my family and I piled in the car and set off to finish the project. We got to Sunset Ridge but there was one slight problem, apparently the Forest Service changed the lock on the gate. So we drove down the hill to the fire station to see if they had the key to the new lock, but they were unaware that the lock had been changed. The Captain called the Angeles Ranger Station and they sent a ranger over to open the lock for us. We waited for about 45 minutes for the ranger and finally we were off again. When we got up there, I unloaded the car and started working. My wind box held together and worked very well. I was able to spray paint the names on the other eight tubes that afternoon.

There were several hikers and two Sheriff’s Deputies that passed though that afternoon and they were all interested and enthusiastic about my project. One of the people who came through was a young man named Chris Nyerges who took pictures of me and wrote an article and put it in the Pasadena newspaper (See book attachment for copy of article). All in all I think this was a very rewarding project and will benefit present and future visitors to Inspiration Point.

Post Script: William (Bill) LaBar today resides in Silverado, California and has just donated this Eagle Scout Project folder to the Mount Lowe Preservation Society, where it will be kept with all our historical documents, photos and ephemera. We are grateful to Bill for his life-long commitment to service and preservation. 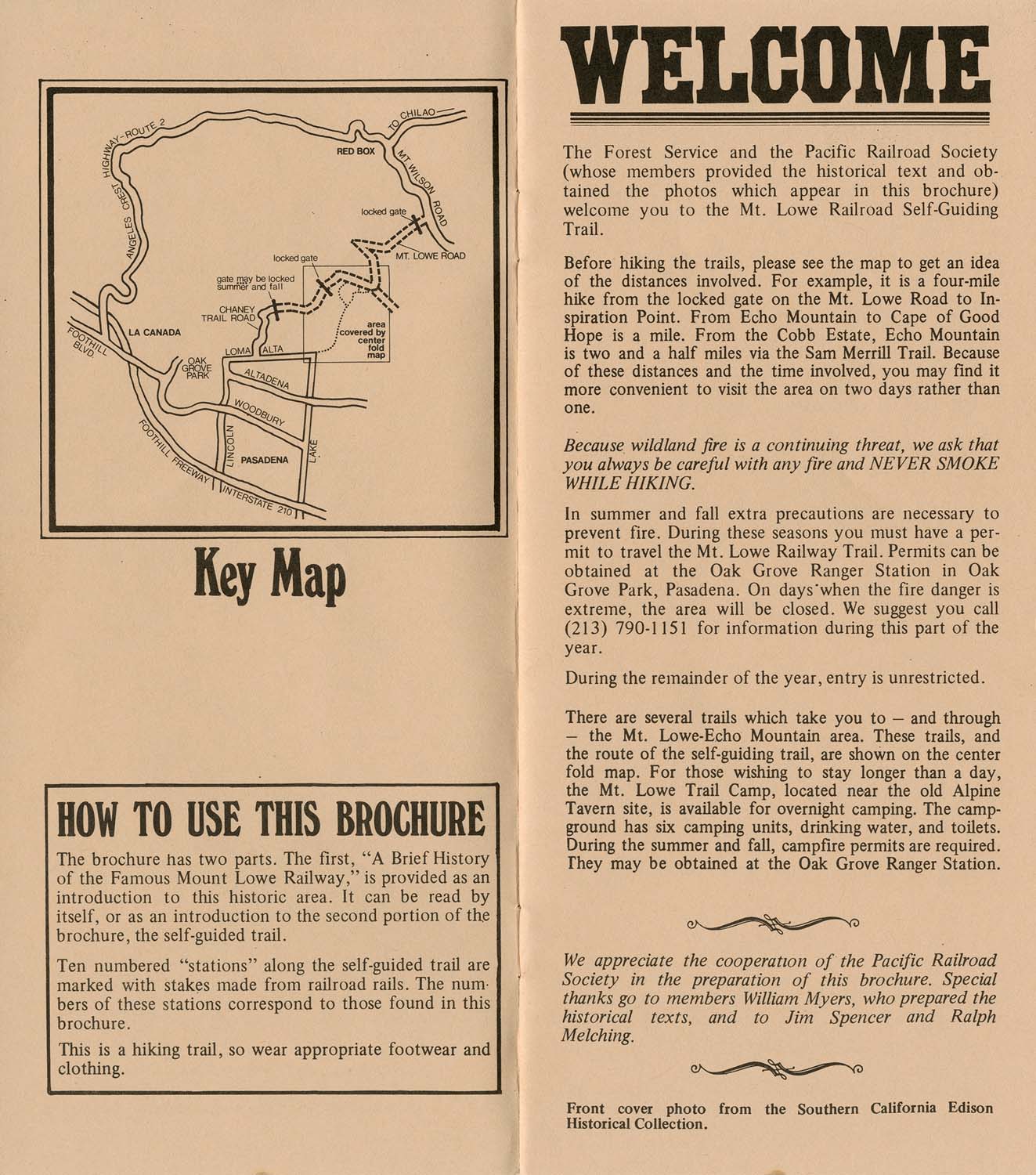 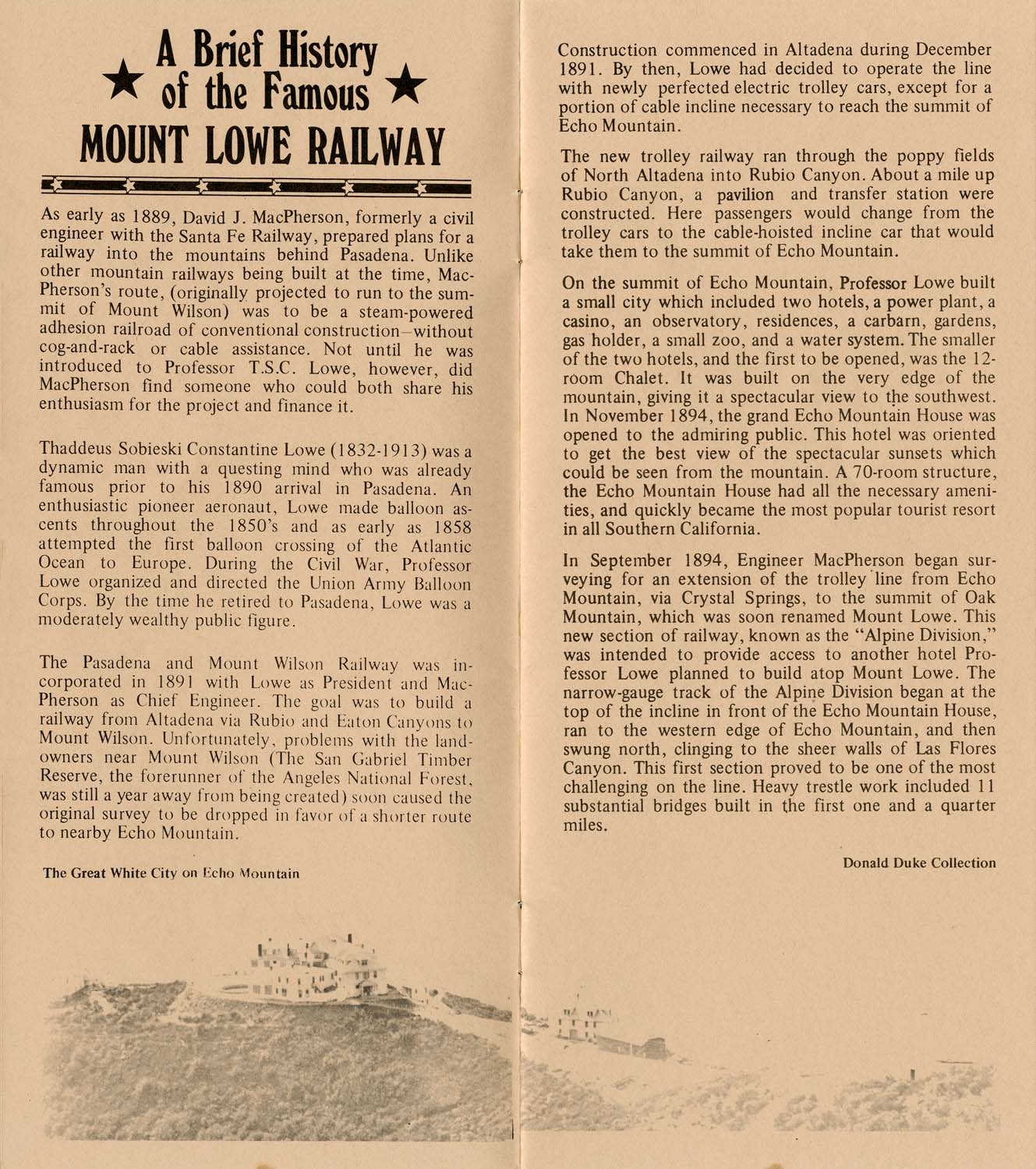 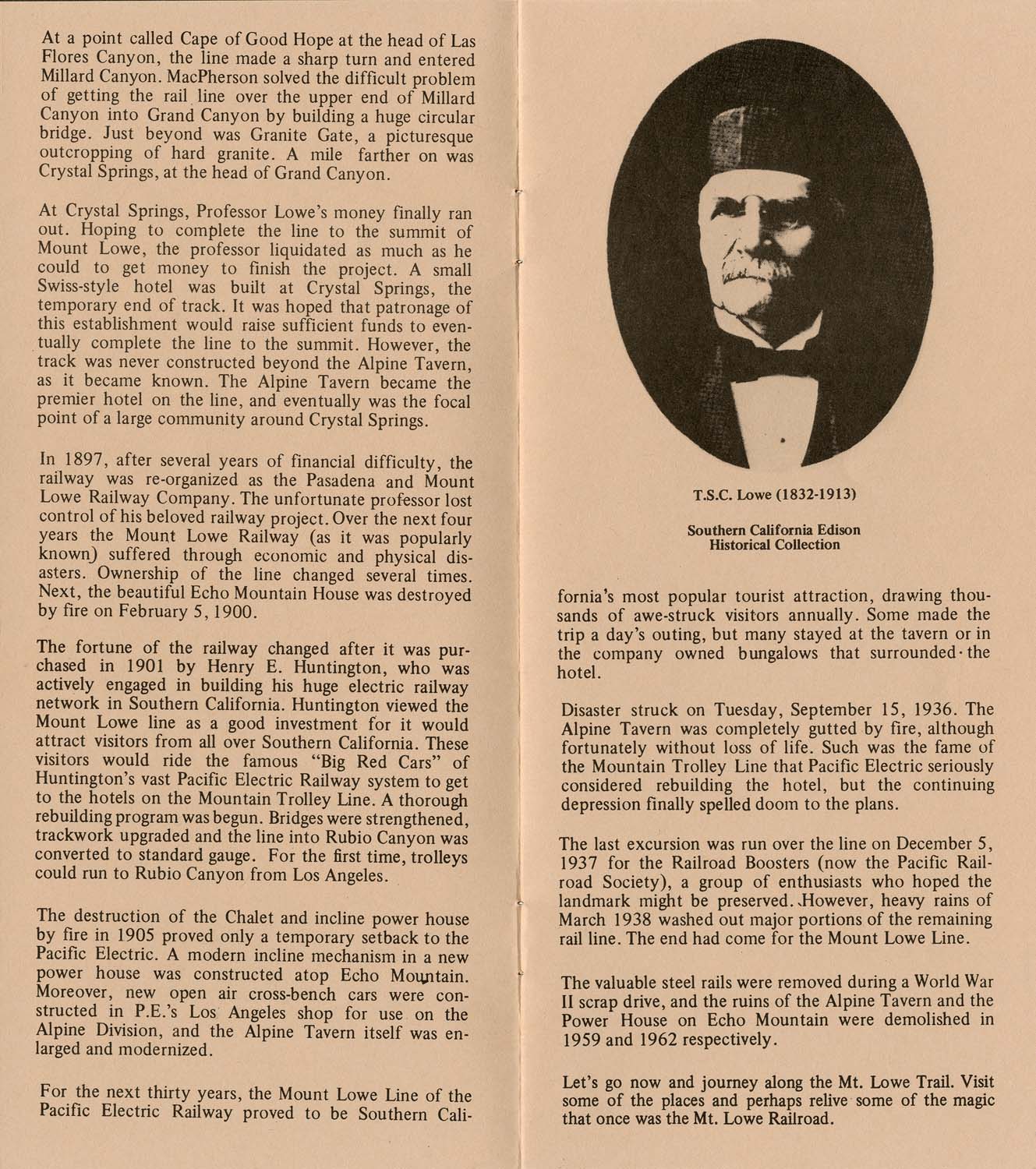 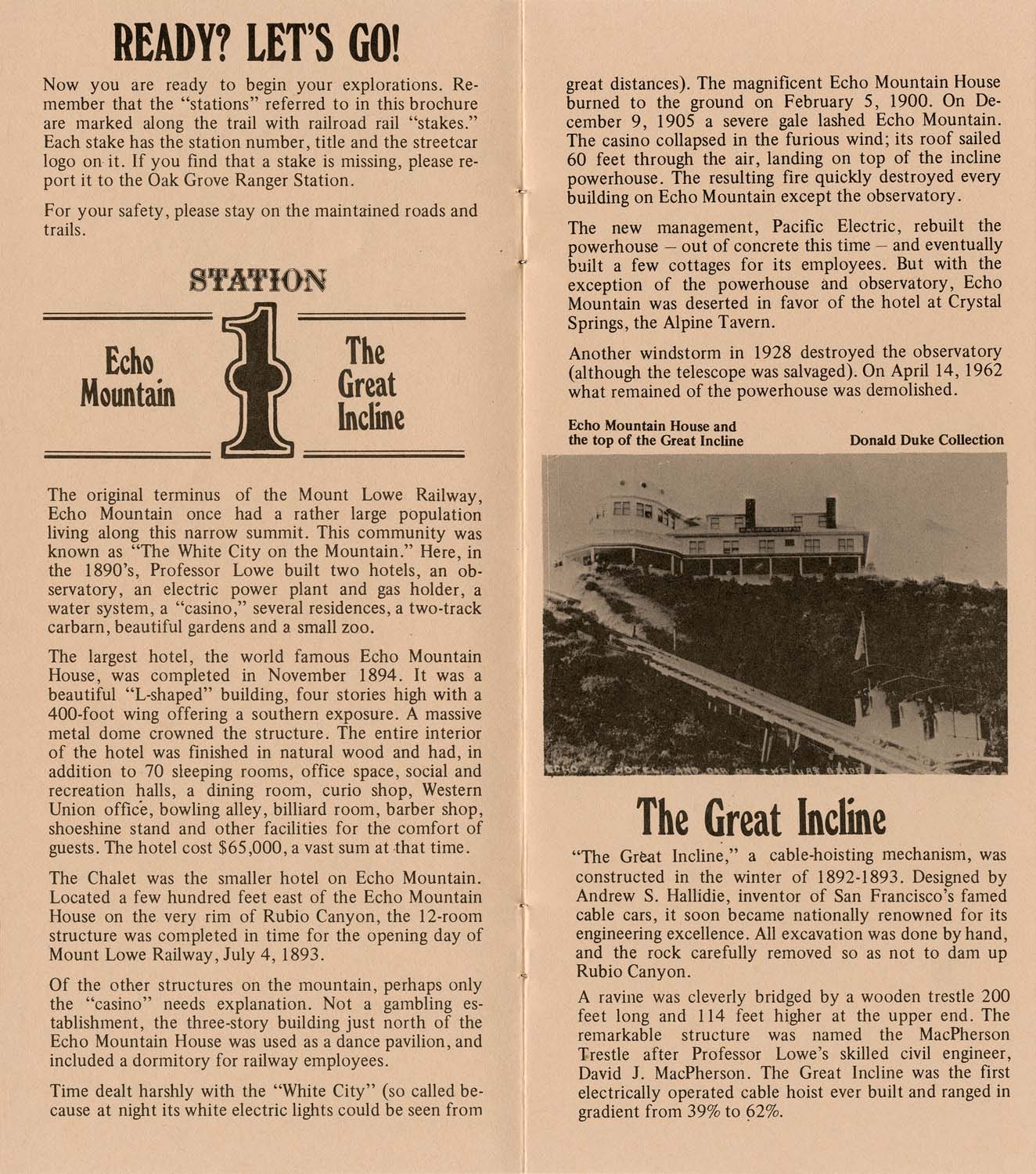 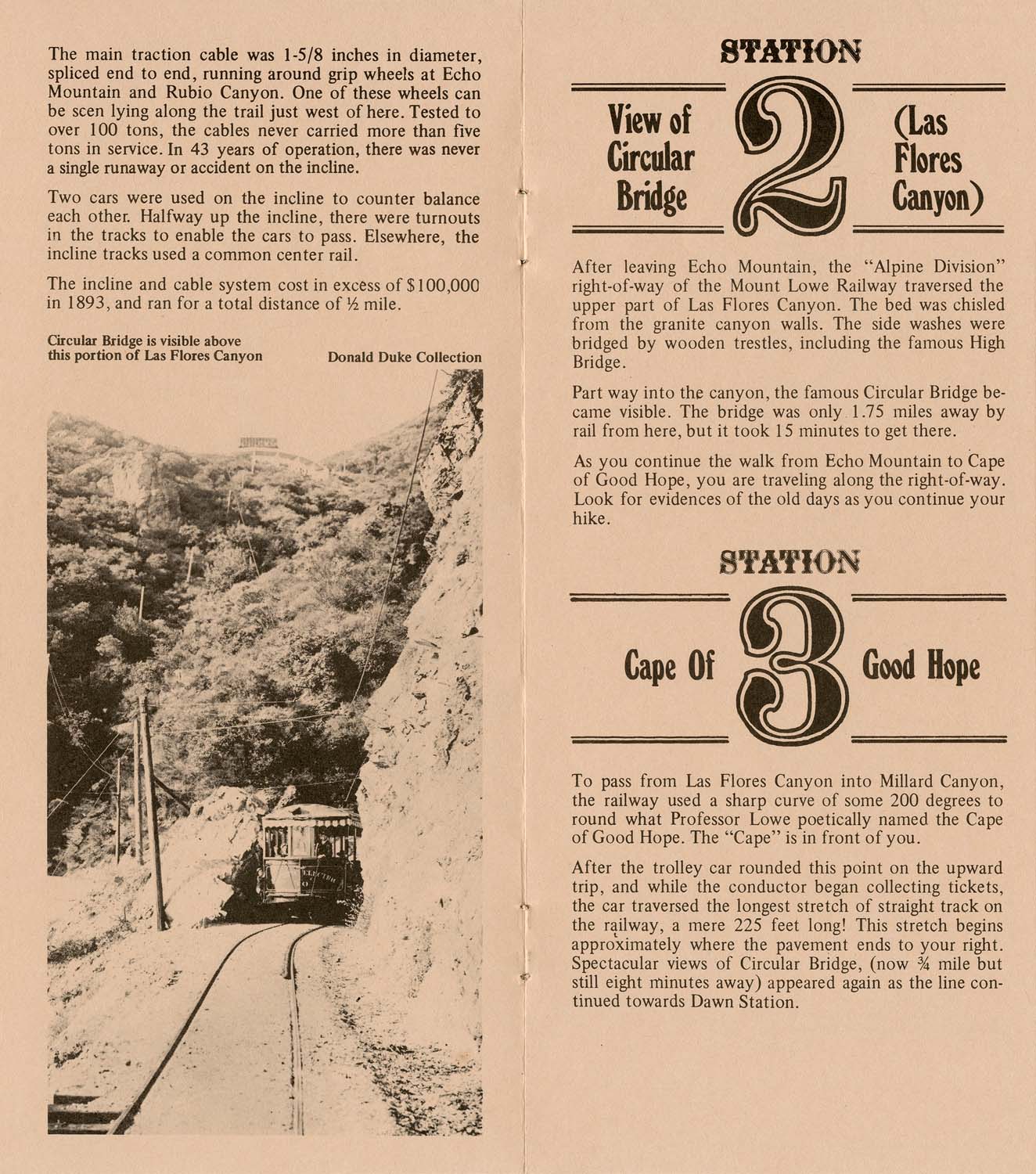 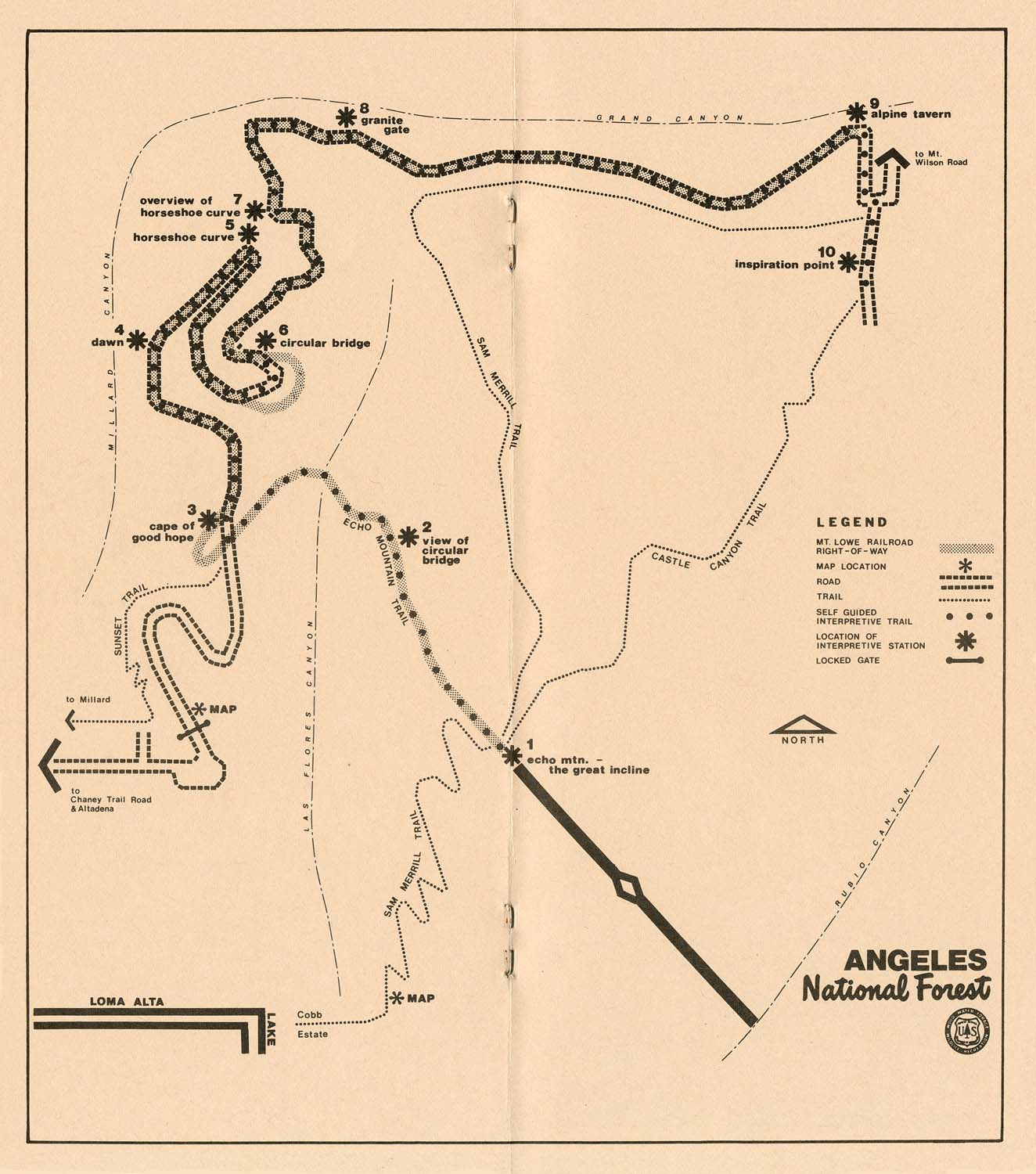 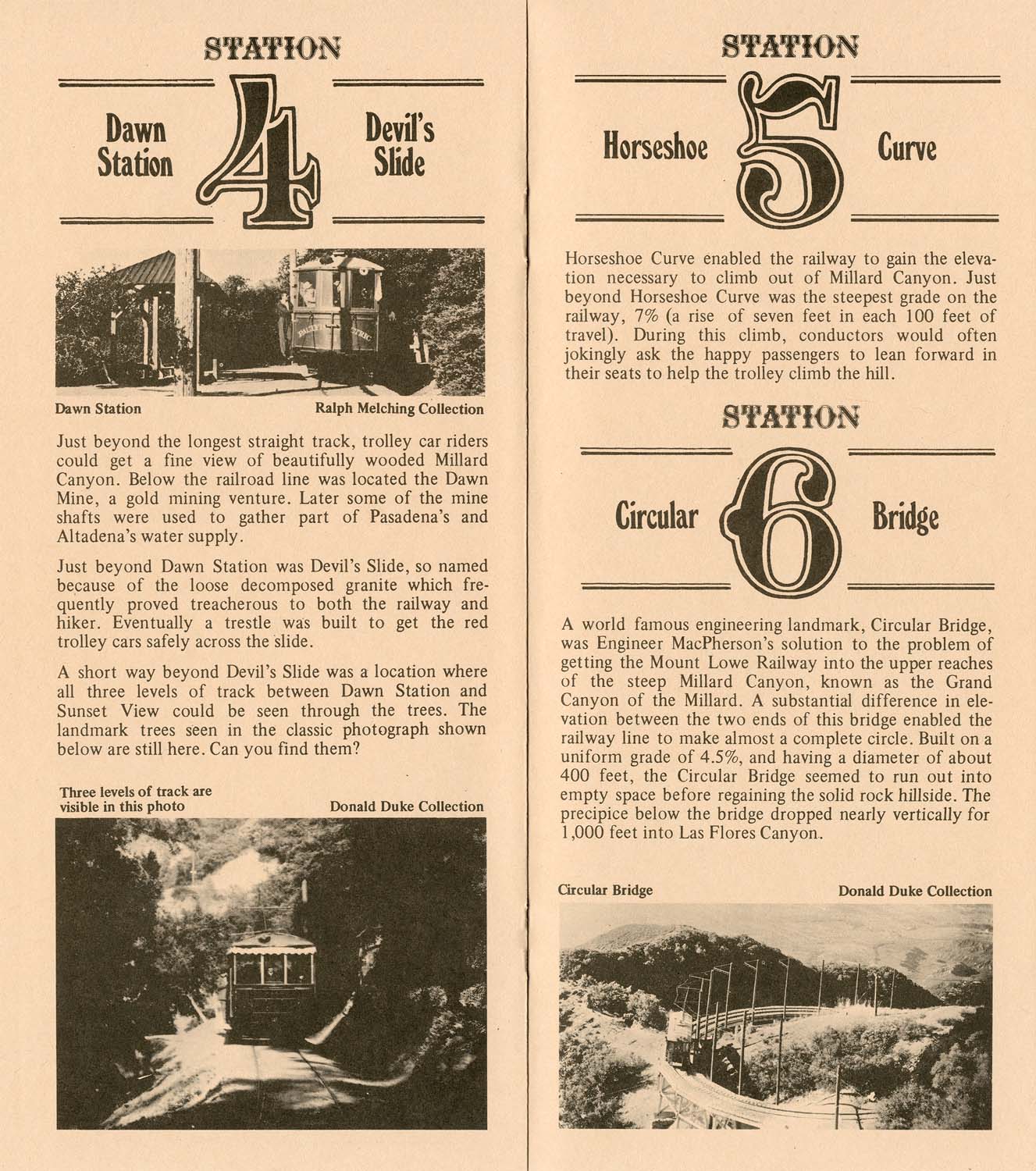 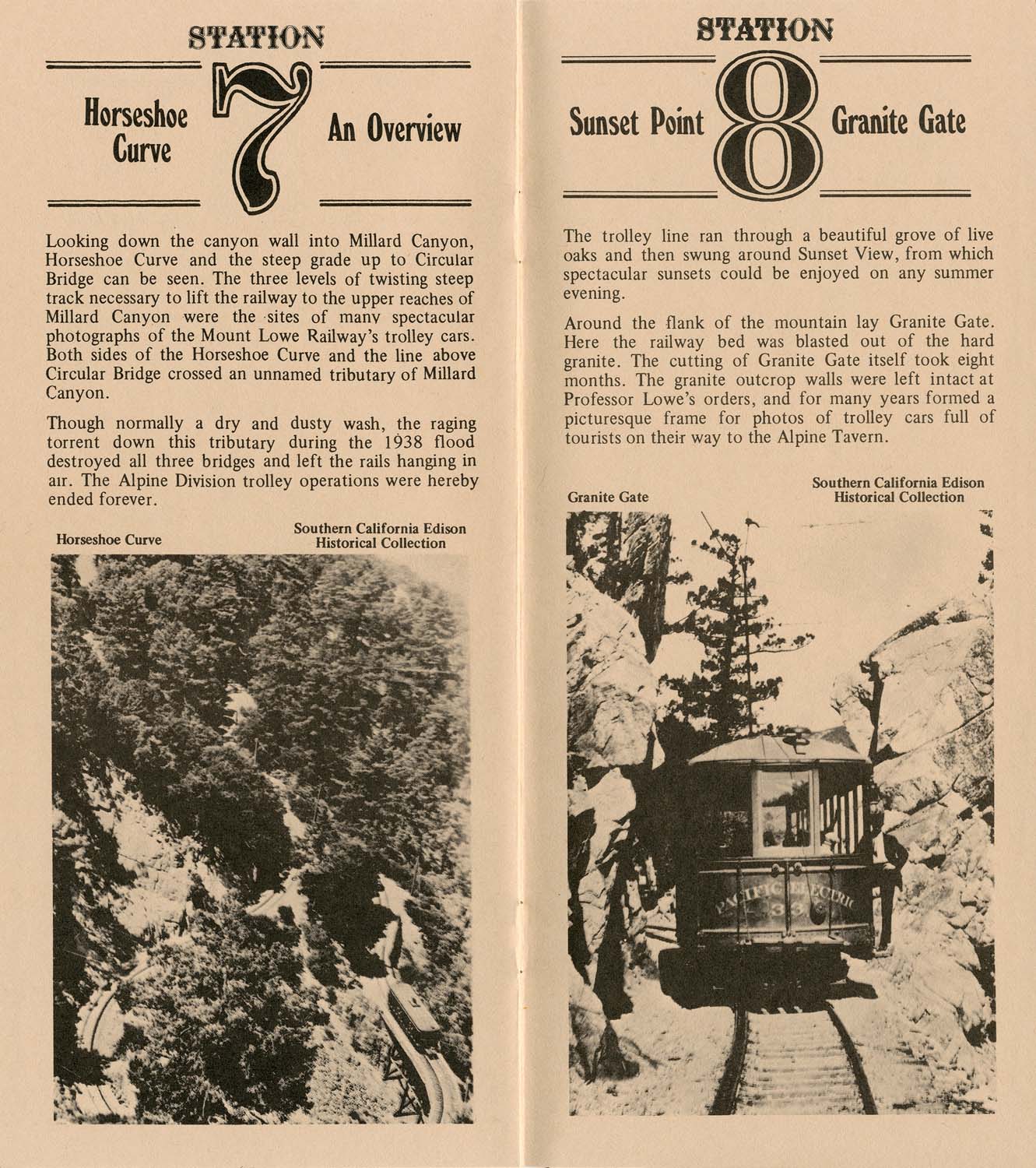 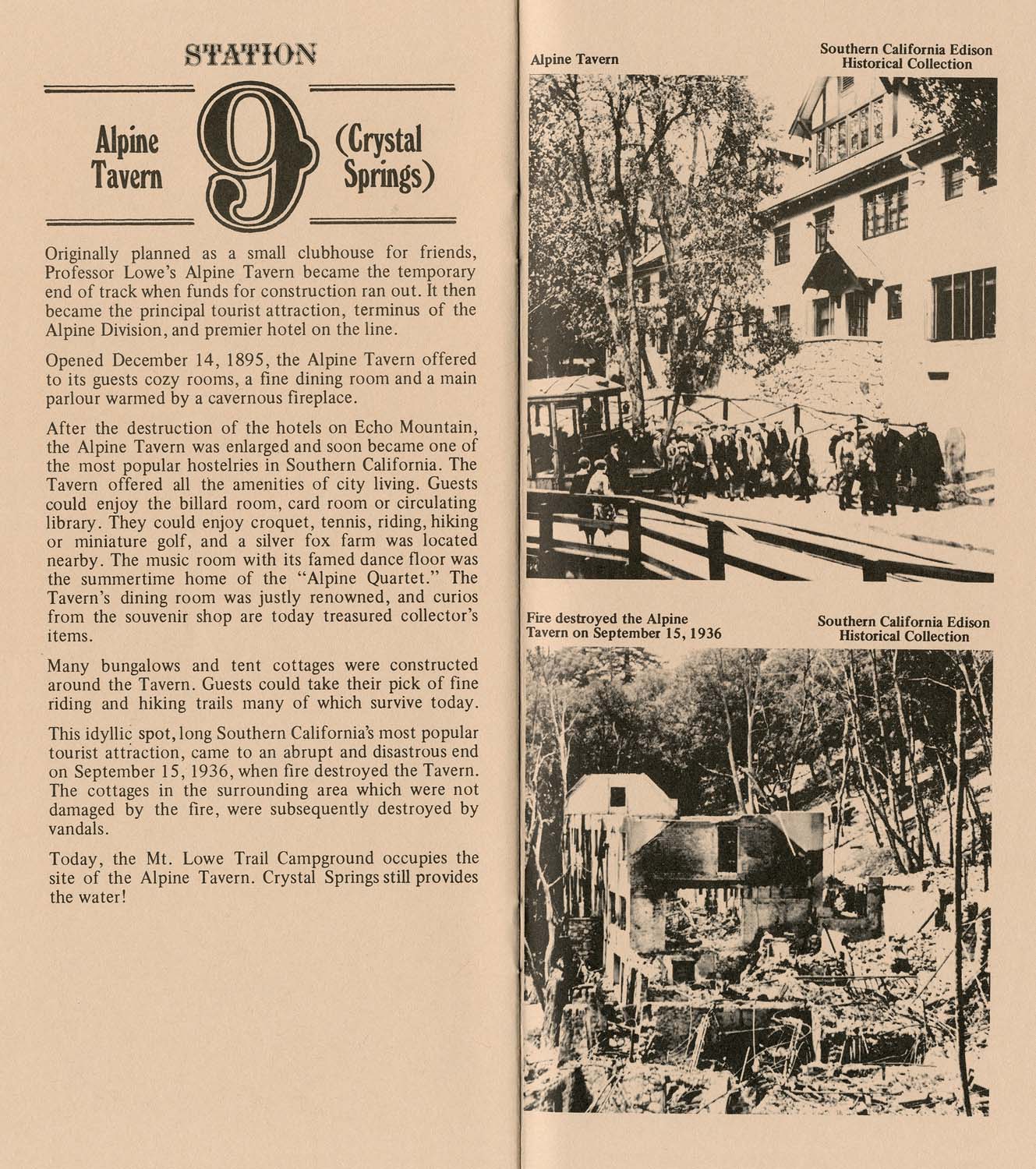 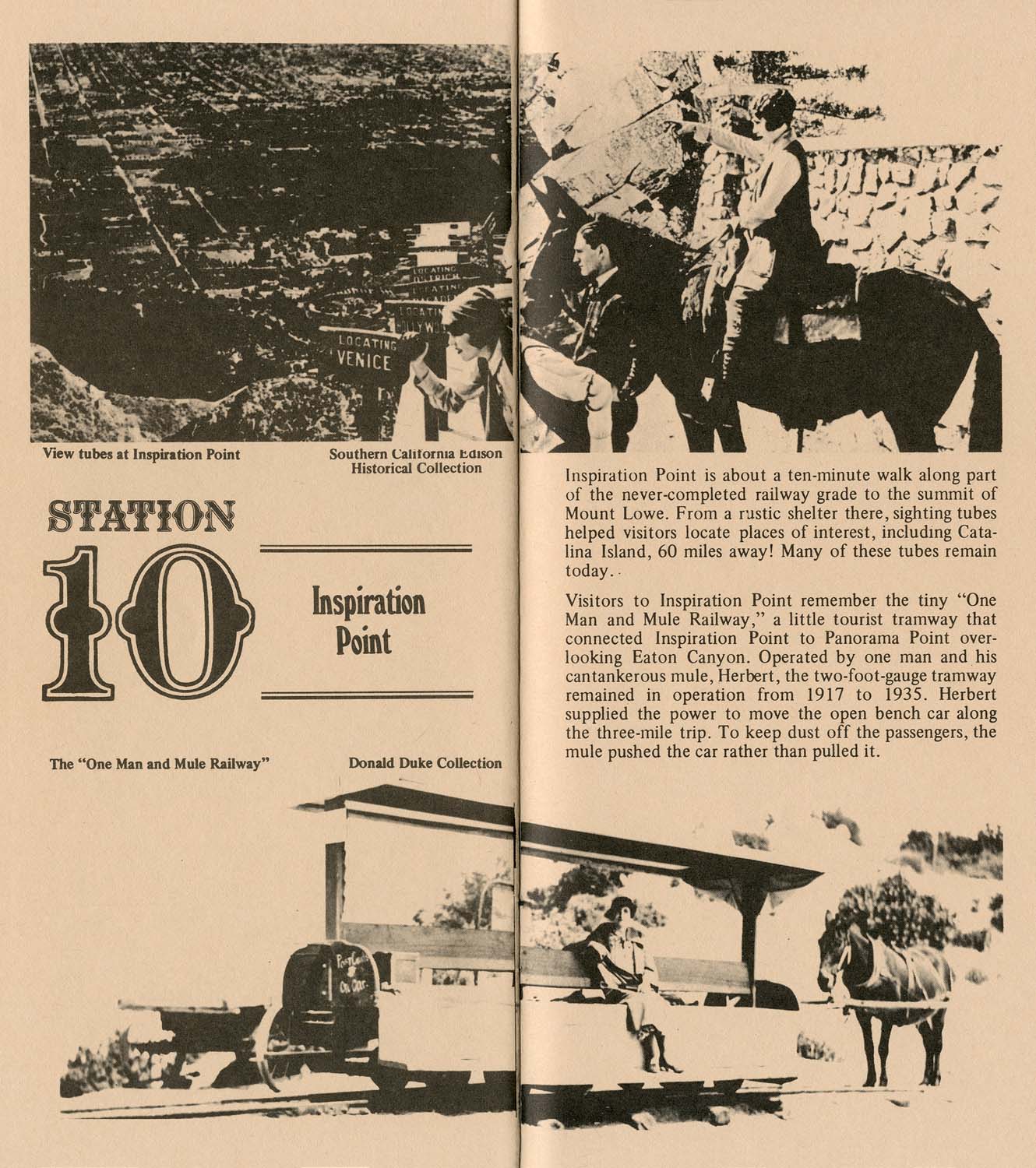 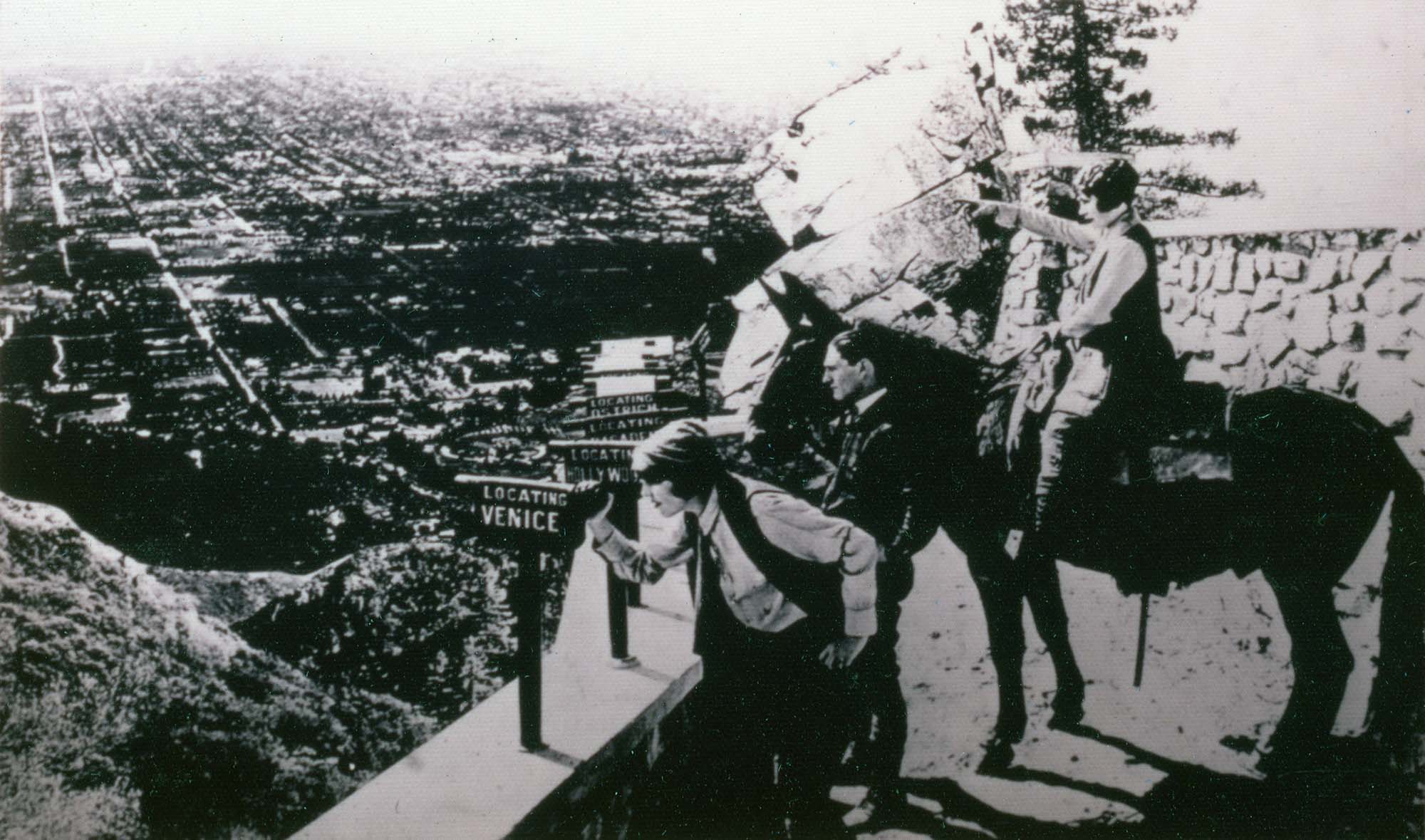