New to the Mount Lowe Preservation Society archives is a pair of undated Mount Lowe Railway souvenir cabinet photos donated by Jerry Rowray of San Antonio, Texas. Featured on the baggage flat on the lower front of the incline cars are Byron Rowray (L) and David Rowray (R) on the white incline car “Echo” and to change it up a bit, David is on the left and Byron on the right of the second photo where the incline car “Echo” is painted red. Jerry tells us both of these men are his great uncles and another great uncle, J. B. Rowray was the General Manager and one of the founders of the Sacramento Northern Railway.

While the two cabinet photos are undated, we do know that Henry Huntington purchased the Mount Lowe Railway to incorporate it into his Pacific Electric Railway and the “Big Red Cars” that plied 1,100 miles of track in four Southern California counties; Los Angeles, Orange, Riverside and San Bernardino. Plainly seen in the background of both of these images is the newly installed signage declaring this is now a PE property.

We also know this is one of the original “opera cars” that Thaddeus Lowe put in public service on July 4, 1893. The red paint of the Pacific Electric lasted only a short time on the incline as folks in the valley below could see the white cars going up and down the hill but not so much when they were painted red. It has been said that seeing the white cars was the best and least expensive advertising that could be accomplished and from the individuals we have interviewed who saw and rode the incline all agree.

The new Echo Mountain winding station behind the incline cars and to the left replaced the wooden structure that burned in December of 1905 and the observatory dome remains untouched as of this date, just to the right of the wooden white electrical pole, top center.

Jerry Rowray further tells us via a November 1914 newspaper clipping that J. B Rowray might be interested in a deal where the Santa Fe Railroad considered the purchase of the Northern Electric Road, which called an important meeting of railroad men and bankers. Jerry further states he is sure the two great uncles were somehow connected with the construction of the Mount Lowe Railway and Thaddeus Lowe, so we have our work cut out for us to determine what we can about the Rowray legacy. If anyone has any additional information on these important men, please do contact us and share your knowledge. Thanks! 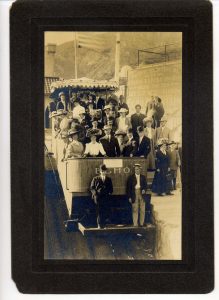